Transform your passion into a profitable business--with the help of legendary entrepreneur, Judi Sheppard Missett, who turned an innovative idea into a $100 million global powerhouse.

In collaboration with AARP and the Newseum in Washington, D.C., BOOMERS 101 distills the top 101 people, places, and things that define the baby boom generation.

“[T]he novel’s greatest strength is its seamless portrayal of what this international chess game means for one man on the brink of losing everything.” ~ Booklist

LAY THAT TRUMPET IN OUR HANDS
"Reminiscent of To Kill A Mockingbird... McCarthy realistically portrays race in a small [Florida] town, showing how good people are tainted by generations of hate... a tale of growth and triumph." ~ Library Journal
TRUE FIRES
"In McCarthy's insightful, fervent second novel... flawless dialogue, warm characters and compassionate wit service a moving story about the powers of love and justice." ~ Publishers Weekly
Books@RandomHouse

FLORIDA ENGLISH JOURNAL:
Tell Me A Good Book to Read
by Ginny White, Past President
Florida Council of Teachers of English

Ever since I sat next to Susan Carol McCarthy at the Amelia Book Island Festival luncheon in October, 2002, and then read her book Lay That Trumpet in Our Hands, I wanted to teach/discuss it with my students. Born in the 1990’s, my students had little knowledge of what life was like under “Jim Crow” laws or through the critical years of the Civil Rights Movement. Despite having often heard the words of Martin Luther King’s “I Have a Dream” speech, they had little background knowledge of its importance.

By teaching Susan’s fictionalized account of a true story, I could introduce them to life in central Florida fifty years ago when narrator Reesa learns her friend Marvin has been killed by the Klan, when no one will investigate, when Klan violence erupts over the state, and when her father joins Thurgood Marshall, Harry T. Moore, and the FBI in a battle for justice.

At last year’s FCTE conference, I purchased a class set of Trumpet from Elise Gold at Books Unlimited (booksunlimited13@aol.com) for 20% discount. Although Trumpet can be recommended for independent reading or for literature circle/book club study, I think today’s students need our adult guidance as they read it. In my classes, discussion was emotional and students were indignant, irate, and shocked. Reading this book led to learning history, profound insights, and changed attitudes among my students.

Before we began our reading, I gave a synopsis of the story – that it was based on the true experiences of Susan’s family, that it dealt with harsh times in central Florida when the KKK exercised great power, that Thurgood Marshall and Harry T. Moore were real people, and that attitudes in those times were quite different from what is considered acceptable today. We established the desire to learn about all this before we began reading. We created an atmosphere of safety for talking about things often not discussed so openly and honestly in school.

As the students and I read, we kept Reader’s Response Journals to record our reactions, comments, questions, confusions—all the things we thought we should talk about. In class we discussed what we had read, sometimes reading passages aloud. We also made a list of people, groups, events we wanted to know more about, which then became research questions. In each class a person took a question to research (e.g. polio/Salk/Sabin, Jackie Robinson/Brooklyn Dodgers, J. Edgar Hoover, Thurgood Marshall, Harry T. Moore, Silver Springs, Florida’s citrus industry, NAACP, KKK, etc.) and then presented orally what had been learned so we benefited from everyone’s digging deeper.

Finally, here again for Amelia Book Island Festival with her new book True Fires, Susan was our Authors-in-Schools speaker on September 30, 2005. Her story of how Trumpet came into being is on her web site at www.susancarolmcarthy.com, but hearing Susan tell the story in person was even more powerful.

The three fictions in the book are these: 1) the narrator, Reesa, is the older sister Susan always wanted, a fictional creation, the person she deemed best to tell the story; 2) Marvin Cully, the young man murdered as a result of being mistaken for someone else, is based on Melvin Womack whose personality is woven from Susan’s relationships with many bright, storytelling pickers who worked in her family’s groves, and 3) the names of the towns and their citizens have been changed to protect identities as Susan felt it their right to tell their own stories. Susan’s father, fictionalized as Warren McMahon, however, did assist the FBI, Harry T. Moore, and Thurgood Marshall during the “Florida Terror of 1951.” The records were sealed and opened 40 years later. And recently on August 15, 2005, Florida Attorney General Charlie Crist announced a $25,000 reward for resolving the murders of Harry T. and Harriette Moore (http://myfloridalegal.com and look under news releases for 8/15/05).

As part of a Book Island Festival panel discussion, Ben Green talked about his book Before His Time: The Untold Story of Harry T. Moore, America’s First Civil Rights Martyr (University Press of Florida, 1999). Susan’s book had led to my students’ wanting to know more of their fellow Floridian Harry T. Moore, so I shared what I was learning from reading this book. As a result, my students have become activists. We have written letters to the NAACP and to the Southern Poverty Law Center, expressing our admiration for Harry Moore and asking them to consider what Green suggests in the title of his book – that Harry T. Moore was indeed America’s first Civil Rights martyr. We would like to see him recognized as such.

This book study was powerful. It was not an easy experience for my students as readers nor for me as their teacher. The truth is often difficult, harsh, and embarrassing. Please read it for yourself before you decide to teach this book; however, I believe the process of discussing Lay That Trumpet in Our Hands will be a learning experience of great meaning for your students and for you.

© 2005 All rights reserved by the Florida Council of Teachers of English.

As much as we would choose to ignore the fact, racism still rears its ugly head - even today in the "enlightened" 21st century. It may not be overt racism, as evidenced by the KKK actions in the 1930s and 1940s. But there is still large evidence of covert racism throughout our society. Much of this is due to economics, class, the politics of power and privilege, or just to a complete lack of knowledge, awareness or sensitivity on the part of many Americans.

We have the responsibility to provide the truth to our students. We also have the responsibility to model behavior that is inclusive. Let's think about what this means. In your library, do you feature African-American-themed books and Chinese artifacts in February, Latino-related stories at the beginning of May, and a menorah in December? Or, do you include these materials throughout the year as they pertain to whatever units or lessons you are teaching?

Does a biography lesson on scientists include scientists of color? Is a unit on American History inclusive of how the particular issues of that time affected ALL the people who lived through it? Do you give books with black protagonists only to black kids, or books with Asian heroes or heroines only to Asian kids? Or do you give these same books to white kids also, so that they can perhaps learn what it feels like to live in another's skin by reading a moving piece of fiction?

Our deeply ingrained attitudes govern our actions. Often, as much as we would like to believe something intellectually, our actual behavior is the biggest indicator of how we really feel. Think of your own life and how you react in different situations. If you hear a student or teacher use a racial slur or perpetuate a stereotype, what do you do?

If you want to measure your attitudes regarding not only race, but also gender, politics, or even guns, go to https://implicit.harvard.edu/implicit/demo. Perhaps you will emerge victorious, or perhaps you will find some things that need fixing. If so, for the benefits of your students - please endeavor to fix them.

© 2006 All rights reserved by the California School Library Association. 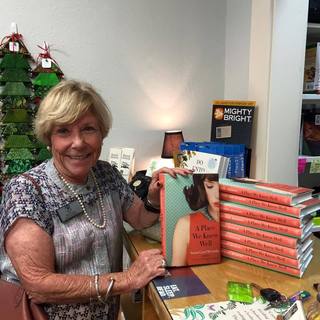 SPECIAL NOTE FROM SUSAN
TO TEACHERS & BOOK CLUBS:
Have you selected A Place We Knew Well, Lay That Trumpet In Our Hands or True Fires for your classroom, literary circle or book club? Would you like to schedule an "author visit" in person, or via Skype, e-chat or speaker phone? Please email me directly at Susan@SusanCarolMcCarthy.com 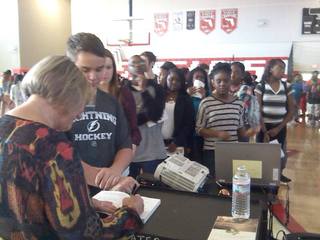